Managing the System, Not the People with the Management 3.0 Methodology 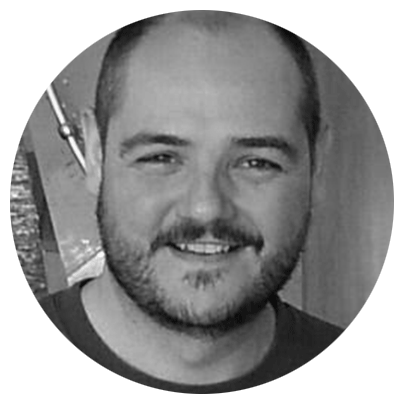 I was having trouble getting class started on time. Class theoretically started at 9:00, but it was impossible since only one or two students actually showed up by then. The rest would straggle in and class typically started 20 – 30 minutes late.

I did have the standard top-down approach of demanding the start time. If anyone was late, I would just start teaching. However, if there was only one student, it made it complicated to teach an agile-based class, not to mention – a little uncomfortable. To make matters worse much of this class was in a flipped style classroom, which started class with an exercise, a debate, or conversation. Kind of hard with 1 student.

I discussed the importance of punctuality and even suggested that once the class started, someone running late couldn’t enter until break. However, nothing worked…

What approach did we use?

After explaining the technique of retrospectives in the subject of Agile, we decided to take a different approach. We chose to conduct a retrospective monothematic to address the issue of punctuality, using the 5 steps:

I started by explaining the Kerth Directive to help the students understand the mindset of a retrospective: jointly seek ways to improve, without looking for blame. This step is necessary and important, especially when dealing with the first retrospective.

We talked to understand the problem a little better. Punctuality for this customer wasn’t only bad in this particular class but in all classes we taught. It was not a problem of a specific subject or a day of the week; it was something systematic.

This point is important, since it was not something specific to a class, or to a trainer. Personally, I was frustrated to see that they were always late, and I thought that I was not motivating them enough, or that something was wrong. When I saw that it was generalized, I felt a little better, but it also became obvious that we needed to solve the problem.

How did we obtain the information to solve the problem?

During the session, I asked them to individually write down on a post-it what time the classes normally started. Almost everyone agreed that it was usually about 9:25 – 9:30.

Was it the chicken or the egg? A vicious cycle had been created: the class starts late, even if I am on time. And, if I am late, they will just wait on me. Change was impossible if it wasn’t seen as a common effort of everyone involved.

Generating an insight about the start time was vital. I asked them to point out what time they wanted to start the class in another post-it. This was the result: 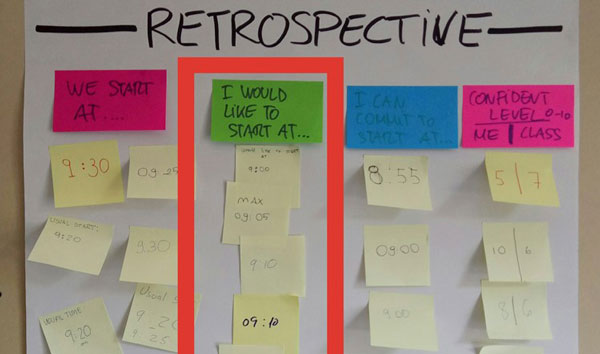 Even though everyone wanted to start around 9:05, the constant tardiness led them to act accordingly. Empathizing between them was important for the next step.

Again, individually, I asked them to write down what time they would commit to arriving. We had verified that the desire to change was there since a majority proposed to start at 9:00 or 9:05 in the previous step. 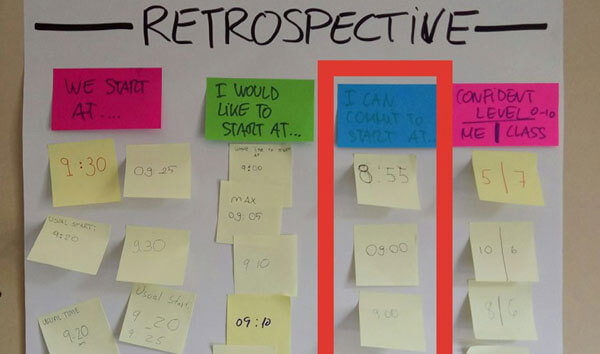 It was then agreed that the class would start promptly at 9:05, at the latest, regardless of the students present in the classroom at that time. That’s when the conversation got interesting. Everyone wanted to change, but their past experience made them think it wasn’t possible.

Thus, the last individual activity was to write on a post-it the degree of fulfillment from 0 to 10 to which they would commit themselves, as well as the degree of compliance that they believed their partners would have: 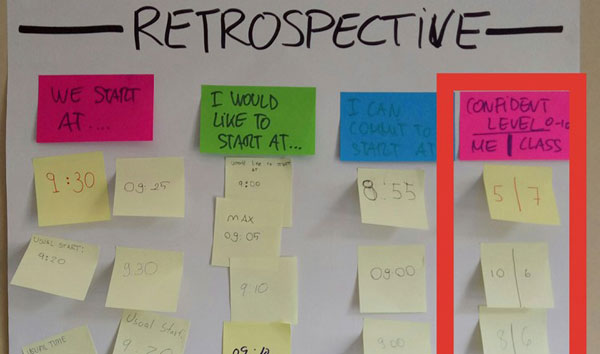 Again, revealing results. Some people voted 10-0. That is to say: I will be here every day, but nothing will change, and we will never start on time. Again, at this point, it was important to create empathy with each other.

Putting an action plan in place without a way to measure the results wasn’t going to help. Based on the Management 3.0 methodology, we created a table on a flipchart to collect data: 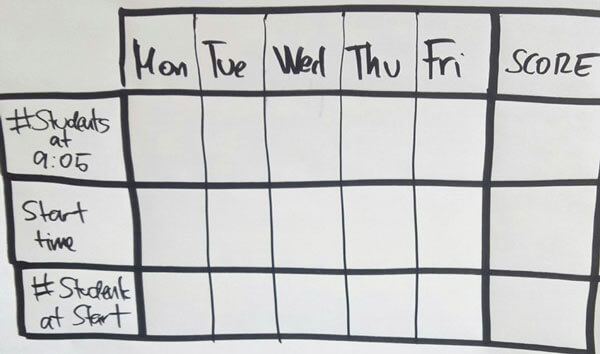 We decided to call it “The Early Table” to give it a positive association (the initial option was “The Late Table”). This table allowed the students to visualize the information in a system that was transparent and available for everyone to see.

Finally, in the last step of the methodology we developed, I asked them for feedback about the session. The general opinion was positive, although some had doubts about its effectiveness. 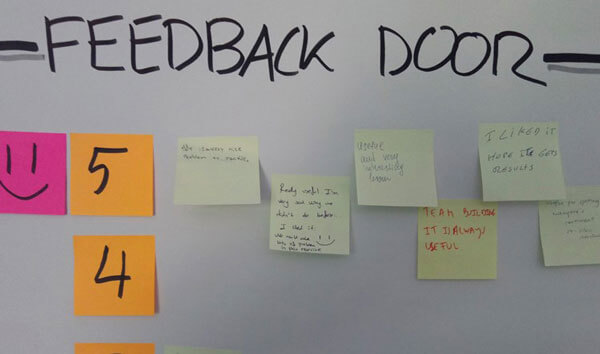 This session took place on a Friday. That following Sunday afternoon I sent them an email with the photos of the session, thanking them for their participation, and a note to remind them of the commitment they made as a group.

What results did we get?

On Monday at 9:00, all the students were there except one. This level of punctuality hadn’t happened in months. And best of all, it has been sustained over time. In the 2 months of classes that followed, almost every class has started at 9:05 – 9:10. Goal achieved!

The Management 3.0 methodology seeks both system administration and empowering people to self-manage. Imposing a start time did not work. Creating an environment where they self-imposed a start time and were able to follow up transparently did work.

If you want to learn the mindset behind this approach and practice techniques, games, and activities aimed at changing your work environment, Management 3.0 can help you, without any doubt.

Transformations Driven by HR: How Eboca Implemented the Holacracy Model

A Guide for Decision Making Using Delegation Poker and Boards

How to Use Jira for Agile Teams

Ride the Waves of Change: Adapting as an Organization