What are Story Cubes?

Rory O’Connor, an Irish consultant specializing in creativity training, realized the power of images and that the simpler they were, the more they helped spark the imagination and develop far more creative solutions. With this idea, he thought that using simple images, stories of all kinds could be created and invented. Very soon the idea came about for a game of dice covered with visually simple icons called: Rory’s Story Cubes.

The original game consists of nine dice, each with six images that make up a total of fifty-four ideas. In addition, there are thematic extensions to expand your visual “gallery” (in case it seemed small 😉). Imagine the amount of possible combinations that exist and, therefore, the infinite possibilities you have to create stories.

How do you play Story Cubes?

It’s pretty simple: throw the nine dice, and tell a story using the images that remain on each of the upper faces as reference. You cannot use the same die twice, and you must use all of them to create your story. The idea is that you can stick to both the literal image and what it can represent. For example, a light bulb can be a light bulb, but it can also represent talent, innovation, idea, brilliance, etc. That way, you can configure your own story as best suits you.

It might seem like a children’s game, but the reality is that Story Cubes are not a game at all (as we understand the concept of “game”), because no one wins or loses, there is no specific number of participants or a set time to create your story. Behind that “childish” appearance, they are a very powerful tool to encourage improvisation and unleash creativity! It is still a bit difficult to understand that drawings are not just children’s things, but that they are a visual element that  can help you discover solutions that you might not have otherwise have considered.

As I mentioned before, although the theory says that at least two participants are needed, the reality is that only one person is needed to create a story, don’t you think? We do not even need to write a story, but we simply look for an element that helps us to get out of a creative blockage by helping us disconnect so that we can reconnect with a different perspective and with a much more open vision.

I’ll give you an example. When I am faced with a new project in which there are no established baselines or clear starting points, but I have many ideas and I do not know exactly how to establish a connection between them, I find myself with the uncertainty of, “Where do I start first?” That’s when I put all my ideas on paper in the form of Story Cubes and throw them on the table. As they fall, I sort them out and start to create a story that is related to the project. I’m improvising, but at the same time trying to do something consistent with what I already know about the project, which allows the mind begins to establish connections, and the process begins to make sense. From there, I go back to see all those ideas that I had written down on the cubes and I am able to put them in order (or throw out ideas that won’t work anymore) to find my starting point.

In a brainstorming session, when there may be a creative block in the ideation process, we tend to “mentally shut down” and not be able to develop more content or propose different options. Using this tool at times like these serves to create a relaxed atmosphere, break the creative blockage, and encourage team participation. We establish more interesting connections, and we reach much more innovative and creative conclusions and solutions. 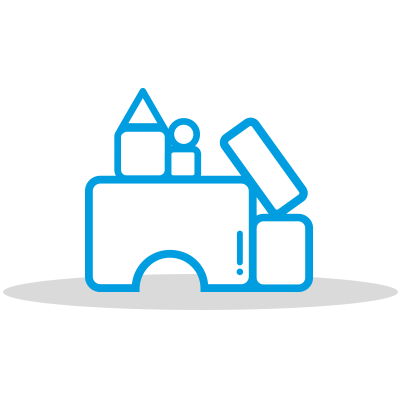 See how we use gamification in our course development to help facilitate learning through play.

The step-by-step of how we envisioned, designed and implemented a feedback process from scratch

The need for change: Designing Adaptive Organizations with Miquel Rodríguez